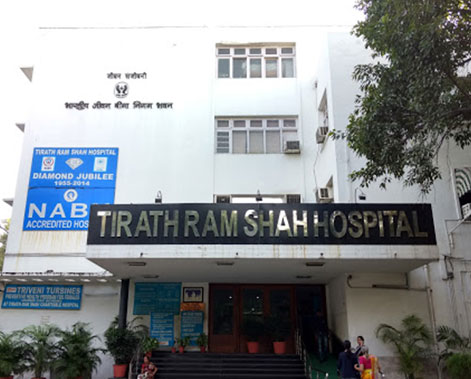 Tirath Ram Shah Hospital is a 200 bedded multi super specialty hospital run by a charitable trust and located in the heart of capital city Delhi surrounded with greenery not only outside but also in the vast courtyard of the hospital and roof-top and spread over built-up-area of about one lac sq. ft. in a three storied building.

Tirath Ram Shah Hospital was inaugurated in 1955 by Dr. Rajendra Prasad. The hospital is accredited by NABH & NABL.

Tirath Ram Shah Hospital was perhaps one of the two or three hospitals of that size in the private charitable sector in Northern India. It soon became a landmark in the health care delivery scenario of Delhi with people like Col. V R Mirarjkar, a famous surgeon from Lahore and Col. Ameer Chand, an eminent figure of medicine in north India together with Rai Bahadur Dr. Mathura Das Pahwa the famed Eye surgeon of Punjab.

The Idea of constituting a charitable trust to run a hospital was envisaged for the first time in 1949 just after the partition of the country. At this juncture the city of Delhi had just started to grow and was in the theories of multi dimensional expansion. A charitable trust was created by a famous industrial family of Sawhneys, initiated by Lala Ishwer Das Sawhney. He  was head of the family at that time to commemorate the memory of their ancestors late Lala Tirath Ram Shah.

Just within a year in 1956 due to the nationalization of the insurance sector newly formed Life Insurance Corporation of India acquired all the assets of Lakshmi Insurance company. Since the hospital had already started functioning, the trustees requested and persuaded Life Insurance Corporation of India to allow the trust to continue the running hospital on lease. So overnight landlord became a tenant but the hospital continues to function till date in this rented building over the last 65 years.

The hospital continue to flourish and serve the poorer section of the society as well as to the rich and famous people of the Delhi and Northern India . Whatever money the hospital made by private room admissions was pledge back to cover the expenses of nearly the 25 % of the patient who couldn’t afford medical care.

During the period of 1980’s to 1990’s, the rapid advancement in the field of medical technology and changing pace of available medical facilities the hospital gradually came to the brink of being named as an old dilapidated burnt out hospital on the verge of the closure during the last decade of the century.

Over the last 10 years or so, since Mr. Dhruv M Sawhney took over as chairman of the trust board and there has been a sort of emotional resurgence during this period. Financial aid from Triveni Engineering Industry has meant that the hospital is not only being refurnished and refurbished but also re-equipped with modern equipment.

Whole of this exercise involved a number of permission, licenses, certificates, evidences and documents which all had to be updated. Following all this there were a series of assessment and reassessment by high power team of experts nominated by quality council of India.

Considering immense clinical material and opportunity for teaching and training of young doctors, the hospital has recognized and accredited for DNB Program in Pediatric and Obstetrics and Gynecology by the National Board of Examination, Government of India.

Nearly 100 % of results are the testimony to our commitment towards training and teaching of young doctors. We keenly looking forward for recognition of a few more disciplines for DNB program by the National Board to boost the national aim of increasing the pool of qualified specialist of various fields.

This is amongst a very few institutions to have recognized the importance of clean environment at the very early stage when the whole concept was in a very nascent stage and have thus implemented.

Rajkumari Amrit kaur at the time of inauguration in 1955. Soon after the trust established one of the very few nursing training center in the capital which have become a crowning glory in this hospital names in recent years. Despite of being a charitable trust and financial constraint, training boarding, lodging of the nursing students coming from not so effluent section of the society is being highly subsidized.

Earlier on an obligatory period of 2 years service with pay just after qualifying was good for both the hospital and new nurse. But the honorable Supreme abolished this obligatory period and made it voluntary thereby pushing the qualified nurses to the corporate hospitals and the government hospitals. Nevertheless we believe firmly in Bhagwat Gita main teaching
“ Karam Kar Phal Ki Chinta Mat kar”